As trusted suppliers for the Ministry of Defence (MoD) since 2007, we provide a 24/7 runway repair service at RAF Brize Norton in Oxfordshire. This means we’re able to mobilise our teams to repair faults within minutes of them having been noticed at the largest and busiest RAF base in the UK, which is home to around 5,800 service personnel. 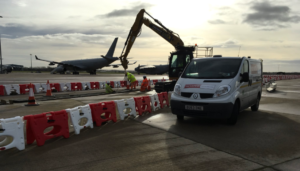 Operation Pitting was the largest humanitarian aid operation for over 70 years, with the RAF flying more than 15,000 people out of Kabul between 14th and 28th August 2021. Over 850 of those people arrived at RAF Brize Norton over the course of two weeks. There, they were provided food, clothing, children’s toys, medical support, childcare and sanitary products.

The full fleet of RAF transport aircraft from RAF Brize Norton flew around the clock to support the evacuation, taking supplies including clothing and baby food to evacuees in the country and flying back with civilian refugees onboard – with one flight carrying a record 439 passengers.

Minster was called to carry out the essential repairs on the runway which had been damaged due to extreme heat damage. Within hours of authorisation, our teams had removed vast sections of damaged runway ready for resurfacing, enabling the base to play a vital role in the international rescue mission.

The emergency runway repairs we carried out were essential to maintain safety for both the Oxfordshire site and the whole of the United Kingdom. As well as having played a key role in Operation Pitting, RAF Brize Norton provides rapid global mobility in support of UK overseas operations and exercises, as well as AAR support for fast jet aircraft both on operations and in support of UK Homeland Defence.

Of course, our contribution to the operation was nothing compared to the bravery and commitment demonstrated by the military personnel and civilians who were directly involved in the effort, from aircrew to medics as well as the volunteers who established a Repatriation Centre at the station. Nonetheless, we are immensely proud of having played a small role in this historic rescue mission to save hundreds of people.

“The safety of the site at RAF Brize Norton is paramount and so when I received the call, it was essential the work was completed immediately.

“Our team worked tirelessly to remove the damaged airfield surface within hours so it could be resurfaced and opened again as soon as possible.

“I am proud to once again be able to support the Ministry of Defence with this project.”

Find out more about our work for the Ministry of Defence here and click here to learn more about RAF Pitting.