Over the past 12 months, Minster Group has completed a number of key projects on behalf of the Ministry of Defence (MoD) and local authorities across the UK.

We’re proud to work with some of the best civil engineering organisations in the country, delivering projects to keep Britain’s roads safe and helping support the UK’s economy.

As a trusted supplier to the MoD since 2007, we deliver a wide range of services to RAF airfields as well as undertaking local authority works throughout the UK, particularly on behalf of Lincolnshire County Council.

Here are some of our project highlights from 2021:

Our teams were contracted to create a new three-armed roundabout, build half a mile of new road, paint three miles of new white lining, and realign and straighten the dangerous bend on Lincoln Road – previously a notorious accident blackspot.

By delivering the work overnight and during the weekends, our teams were able to ensure no disruptions were made to flying or work schedules on base.

With the help of Minster Group, Holdingham roundabout in Sleaford officially reopened after 10 months of major road improvements earlier this month.

Our teams have played a huge part in helping widen the roundabout, increasing safety for drivers and reducing environmental impact.

In April, our teams surfaced a brand new pedestrian path through the Grade II listed parkland in Boultham Park, Lincoln.

The new pathway has brought many new visitors to the area and has improved accessibility for both wheelchair and pushchair users.

Minster Group helped contribute to the transformation of the multi-million pound Cornhill Quarter redevelopment in central Lincoln during the summer.

Our teams were called in by Lindum Group overnight to resurface the Cornhill pedestrian square, where a number of restaurants and bars are now able to enjoy the fantastic outdoor space.

In June this year, we helped our good friends at Eurovia UK complete the town improvement works in Macclesfield.

The ‘Castle Street scheme’ to revitalise Macclesfield town centre has seen footways widened and resurfaced, creating scope for cafés and restaurants to have outdoor seating. 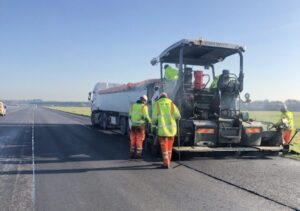 RAF Waddington in Lincolnshire is one of the RAF’s busiest stations and is the hub of UK Intelligence, Surveillance, Target Acquisition and Reconnaissance.

We’ve worked on many projects for the airbase throughout the year, including the resurfacing of their taxiways and runways out-of-hours. 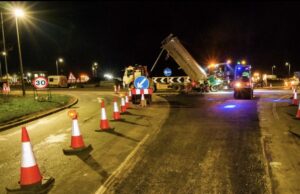 We’re really proud to have played such a vital role in delivering projects for local authorities and the MoD throughout this year, whether we’re improving road infrastructure, ​​working on projects for the airforce or helping support the UK’s economy.

We play an important role in keeping Britain’s roads – and airfields -operational and safe year-round and our teams can’t wait to continue working on exciting projects in 2022 and beyond!

Get in touch if you’d like to find out more about our work.