Holdingham roundabout in Sleaford has officially reopened after 10 months of major road improvements, with the help of Minster Group.

Minster Group has worked alongside Eurovia to play a major part in the crucial transformation of Holdingham Roundabout in Sleaford on behalf of Lincolnshire County Council.

The scheme, which was completed on 7 December 2021, has eased congestion, increased capacity and improved traffic flow in all directions.

Since February this year, Minster’s teams have played a huge part in helping widen the roundabout, increasing safety for drivers and reducing environmental impact. 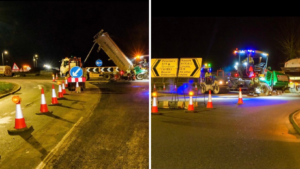 The £8.25m project included the installation of 24 new traffic signals and nearly one and a half miles of new kerbing, as well as the development of the A17/A153 Sleaford Rugby Club junction.

Lincolnshire County Council officially opened the roundabout earlier this month after 39,000 workforce hours were spent, almost a mile of new drainage was installed and over 16,000 tonnes of tarmac, stone and other road-building materials were used.

The major changes to the roundabout – which include new approach lanes and traffic signals – will not only improve traffic flow but also lessen people’s journey times and improve air quality.

It is hoped the improvements will also increase the local economy in Sleaford and surrounding areas during the Christmas period and beyond.